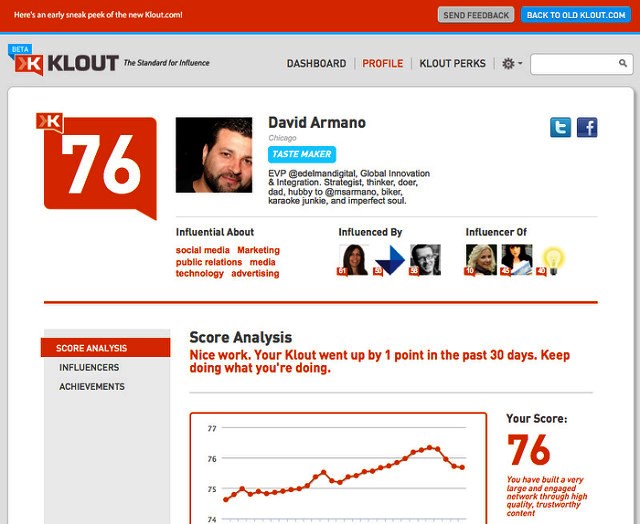 The score supposedly graded social media influence with a single number and held clout in the past. Social media savants eagerly, even desperately, sought high Klout Scores. The scores boosted — and bruised — egos. High scores improved chances for new jobs, freelance assignments and even hotel room upgrades. Britney Spears once appeared at Klout’s headquarters to demand to know why her score was lower than Lady Gaga’s, Ad Age reported.

Influencers and influencer marketing professionals eventually started to ignore the scores. They learned that the score was actually a poor gauge of influence. Klout based its score on overall social media activity, not audience engagement or the influencer’s audience. Influencers learned to game the scoring system by purchasing followers and churning out posts with automated tools. Brands sometimes partnered with influencers who had large numbers of followers but who actually lacked any real influence.

The passing of Klout underscores the evolution of social media metrics and the growing sophistication of social media measurement. Brands have become more advanced in how they measure influence and vet influencers. Savvy digital PR and marketing professionals have moved beyond volume of activity and vanity metrics.

Brands can now use advanced social media measurement tools to integrate large amounts of data from multiple social networks and other sources to gain a holistic view of the PR and marketing situations. More PR and marketing pros realize that measurement enables them to improve their influencer marketing programs, demonstrate its value to management and obtain increased funding.

Klout Score Rides off into the Sunset

Lithium, which purchased Klout in 2014, announced it will “sunset” the service on May 25. “The Klout acquisition provided Lithium with valuable artificial intelligence (AI) and machine learning capabilities but Klout as a standalone service is not aligned with our long-term strategy,” stated Lithium CEO Pete Hess. It will focus on its messaging service.

That rating system will be interesting to see, Hutchinson says. Companies that provide influencer ratings typically rely most on Twitter since it’s the most open platform. Yet fake automated accounts on social media pose a challenge to influencer ratings, and Twitter suffers an especially severe problem of fake accounts run by automated robots.

Bottom Line: The death of the Klout Score signals the increasing sophistication in social media measurement. While many people once fretted about their Klout Scores, the ratings fell out of fashion in recent years and brought more mockery than respect. Given the complexity of social media, grading social media authority with a single number may have been unrealistic in the first place.