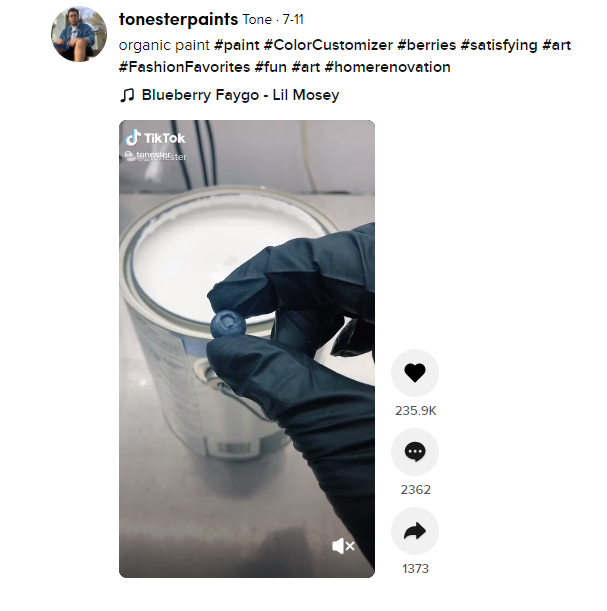 A recent nationwide story about the paint-mixing videos of a part-time paint store employee offers some valuable lessons about how not to manage employee advocates on social media.

Tony Piloseno, a senior at Ohio University who worked part-time at a Sherwin-Williams store, liked to demonstrate how to mix paint to for his 1.2 million TikTok followers. The videos of different colors mixing together are visually quite captivating. Piloseno said he wanted to use his account (@tonesterpaints) to show what Sherwin-Williams paints could do and to market the brand to a younger audience.

The store management’s response: They fired him. The company said his dismissal was due to “gross misconduct,” including using company equipment and products for his personal use, BuzzFeed reports.

Piloseno initially posted video clips to TikTok of himself mixing paints for customers at the Athens, Ohio, store about a year ago. But he soon started purchasing paint with his employee discount when the number of his followers spiked and his account went viral. Recognizing its marketing potential, he submitted a marketing proposal to the company this spring.  After a couple of months, the company marketing manager said they weren’t interested.

“I never got a chance to tell my side of the story. I thought an HR person would call me about it — I never even talked to my district manager,” Piloseno said.

Reactions to his dismissal were predictably negative toward Sherwin-Williams. The company failed to capitalize on a huge opportunity to reach new customers. Instead, it faced substantial negative backlash from incredulous social media users and media pundits who called it a dinosaur and downright stupid.

Many brands strive to encourage employees to mention their products on social media and most can only dream of an employee displaying its products to more than a million followers.

“They sent a signal, as loud as it was unintentional, that employees who do what they’re told are more valuable than employees who think outside the box,” Andrew Cross, senior VP of public relations Walker Sands, told AdAge. “They’ve unintentionally stifled employee ingenuity.”

Companies can benefit from a written social media policy. It’s not clear if the paint company has such a policy.

A good social media policy can prevent PR crises, protect the organization against rogue employees, and provide employees support and guidance when they’re using social media on company time and for their personal accounts.

The story ends much better for Piloseno than his former employer. Less than a week after news reports of his termination, he found a full-time job at Florida Paints. He received an offer from almost every national paint company, but chose Florida Paints because of its family-like culture, AdAge reports. He’ll move to Florida and will soon graduate after completing online classes.

Don Strube, founder of Florida Paints, said he learned about Piloseno’s “mesmerizing and soothing” TikTok account about a year ago from his four daughters who use the platform. Piloseno’s innovation will mix well with Florida Paints, he adds.

Bottom Line: A paint company turned a social media marketing opportunity into a PR blunder by first ignoring and then terminating an employee who featured its products on TikTok. The incident provides a warning to PR and marketing professionals about recognizing the potential value of employees thinking and acting outside the box.