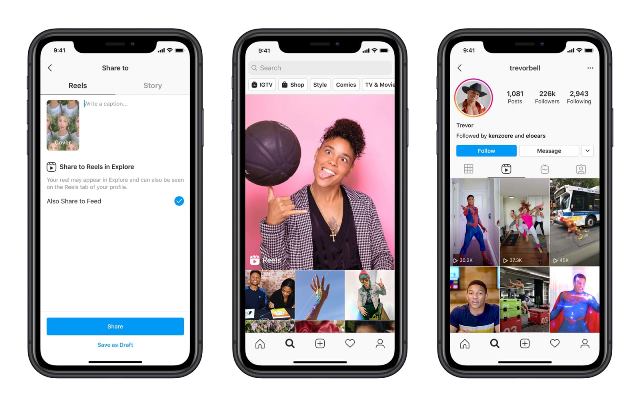 Instagram hopes to knock off TikTok with Reels, its new video feature. An obvious copy of TikTok, Reels features 15-second video clips that users can overlay with audio and special effects and share with others on the network.

After enjoying an explosion in popularity, TikTok has faced political scrutiny due to its Chinese ownership. The Trump Administration charges that TikTok poses a national security risk and has banned downloads of the app. The administration has approved American firms to own the U.S. version of TikTok, but questions remain if the arrangement solves the perceived security issues since the Chinese company Bytedance will still control the algorithm.

Influencers, also known as creators, say they won’t abandon TikTok or other networks. “Just as brands shouldn’t advertise on only one platform, I can’t put all of my eggs in one basket either,” Amanda Cerny, a comedian with nearly 26 million Instagram followers and 8.6 million TikTok followers, told Time.

More than a few brands, including some household names like Dunkin, Red Bull and Maybelline, quickly showed an interest in Reels.

After selecting Reels at the bottom of the Instagram camera, users see creative editing tools on the left side of the screen. They can add audio, either a song from the Instagram music library or their own recording, AR effects, controls to speed up or slow down video or audio, and other tools. Reels can be recorded in a series of clips (one at a time), all at once, or using video uploads from your gallery. Users can add a caption and hashtag, and tag friends.

But many marketers lack good reasons to invest their limited time and resources in the new format. Whatever eventually happens to TikTok, it’s not certain if Reels will gain long-term traction.

Marketers may wish to jump into the new format if they already see success from social media videos and Instagram marketing and if their target audience frequents Instagram, advises social media strategist Laura Davis in Social Media Examiner. Davis cites others reasons to try Reels.

Because Reels are short, they’re easier to create than most other types of video. And unlike Instagram Stories, they’re permanent, so customers are more likely to see them. They’re also easier to share than Stories and allow ample space for hashtags and copy.

While Reels does not yet host advertising, marketers can create custom audiences from people who have watched their Reels and then retarget them with Facebook and Instagram ads. That offers a powerful but little known advertising capability.

There are also disadvantages to Reels, Davis says. Many users are not yet aware of the format, and marketers cannot schedule them in advance.

Not all reviews have been positive. Journalists at The New York Times panned Reels as “a dud,” calling it “confusing, frustrating and impossible to navigate.”

Bottom Line: Instagram is competing directly against TikTok with its Reels feature. As TikTok faces a questionable future, brands may wish to take a close look at Reels. Early adopters may win a long-term advantage.