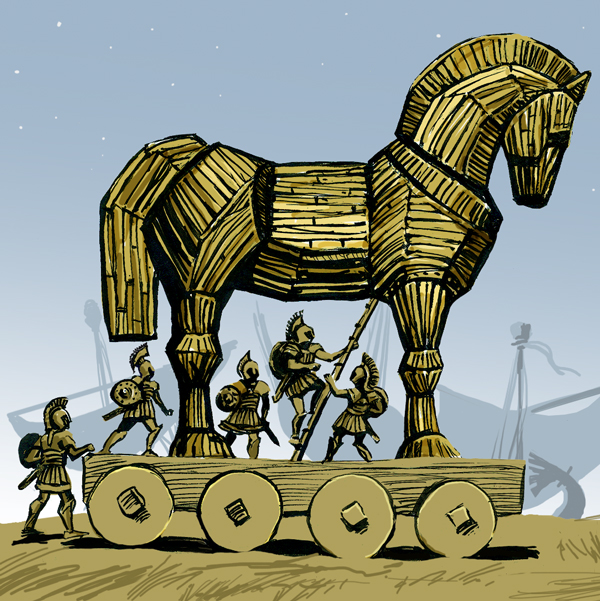 “The Iliad” follows one of the seven basic storytelling plots.

In the past, PR pros focused on pursuing journalists to tell their company’s story. With the prevalence of owned media like corporate blogs and the spread of brand journalism, PR has assumed the storytelling function.

Telling compelling stories is not easy. But PR pros don’t have to create an entirely new plot. All the basic storylines have been used many times throughout the years in fiction, journalism and promotional pieces. PR pros only need to pick the basic plot that best meets their needs, tweak it, and adapt it to tell their specific story.

In his book, “Seven Basic Plots,” Rob Schwartz describes the archetypical plots used throughout history, from Greek mythologies to 21st century advertisements. Almost all brand stories fall into one of these categories.

Overcoming the monster. The hero, often the underdog, battles a monster or evil force. The plot is common in Greek mythology, American Westerns, and comic book superhero stories. You see it in James Bond and Star Wars movies. Apple used in its Big Brother “1984” ad alluding to IBM.

The plot can tell the story of a small company fighting a large competitor, a company founder battling personal or professional demons, or an everyman who fights the establishment.

Rags to riches. A poor man overcomes adversity to become wealthy, gains insight along the way, and sometimes loses his wealth. Charles Dickens used the plot in “Great Expectations” and “David Copperfield.” Johnny Walker brand Scotch, founded by a Scottish farm boy, used the plot in its ads. The plot is common for entrepreneurs.

The quest. The hero or small group departs on a voyage to reach a location or acquire some valuable object. Examples include “The Iliad,” “The Pilgrim’s Progress” and “The Quest for the Holy Grail.” Consider the plot for startups and entrepreneurs who fought to overcome obstacles.

Voyage and return. The protagonist travels to a strange land and encounters dangers and adventures before returning. The voyage typically changes the protagonist’s viewpoint about life. Examples include “The Odyssey,” “The Time Machine” and “The Hobbit.” Expedia and Corona’s “Find Your Beach” campaign applied this storyline.

Comedy. Humorous characters triumph over adversity and reach a successful or happy ending. Examples include “A Midsummer Night’s Dream,” “Much Ado about Nothing” and “Four Weddings and a Funeral.” Consider the plot for an irreverent upstart company. Brands applying this strategy include Warby Parker, Geico and Progressive, which are willing to poke fun at their own industries.

Tragedy. The protagonist is a villain who falls from grace and whose death brings a happy ending. Examples include “Macbeth,” “The Picture of Dorian Gray” and “Breaking Bad.” A tragedy is difficult to apply to commercial promotion unless it has an upbeat or transformative ending.

Rebirth. The protagonist is a villain who redeems himself or herself. Examples are “Beauty and the Beast,” “The Snow Queen” and “A Christmas Carol.” Consider this story line for a business that has survived a reputation crisis, economic downturn or other near-death experience, whether self-inflicted or driven by external forces. Companies using this storyline include General Motors and Lego, which faced bankruptcy 10 years ago.

Bottom Line: Rather than creating a storyline from scratch, PR pros crafting their brands’ stories can tap these archetypical plots that storytellers have used for millennia to enthrall and delight audiences. Whatever the story, chances are that its plot fits into one of these categories.

7 Basic Types of Stories: Which One Is Your Brand Telling?
Ad Week