Cinnabon’s Tweet Shows the Risks on Social Media: How to Avoid Them 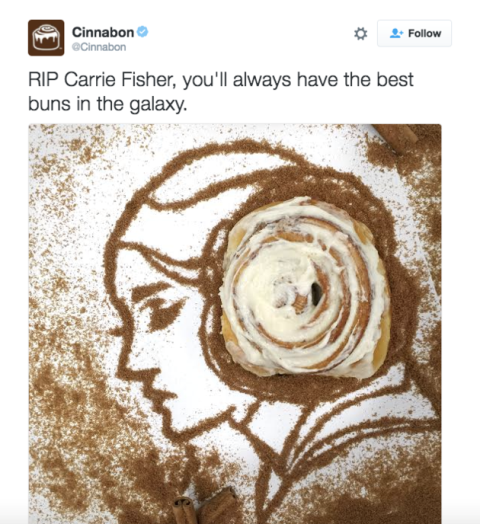 Cinnabon intended to offer tribute to the late Star Wars actress Carrie Fisher. But its tweet instead left a bad taste in many mouths. The brand tweeted: “RIP Carrie Fisher, you’ll always have the best buns in the galaxy.” A photo showed a portrait of Princess Leia done in cinnamon and sugar with the company’s cinnamon buns as the knobs in her trademark hairstyle.

Twitter users took offense and Cinnabon found itself in a sticky situation. After complaints, Cinnabon promptly deleted the tweet and apologized hours later, stating: “Our deleted tweet was genuinely meant as a tribute, but we shouldn’t have posted it. We are truly sorry.” Although deleted, the tweet survived in screen shots and attracted commentary on CNBC, CNET, USAToday, CBSNews and many other publications. In fact, it may have been the most publicity Cinnabon has ever received.

Some believe social media users are overly sensitive. Cinnabon had frequently promoted its rolls with the Princess Leia hairstyle and Fisher herself had first referred to the hairstyle as Cinnabon buns.

Still, the tweet was ill-advised. Experienced social media marketers have learned that a celebrity’s death or other tragedy is not the time to promote their product – or even appear promotional. There is really no good way for a corporate brand to honor a celebrity’s death. The safest option is to stay quiet.

“It’s insensitive,” crisis management expert Jessa Moore told the Huffington Post. “It’s like they’re saying, ‘we’re going to capitalize on [a celebrity] death so we show up in a search algorithm.’”

The incident recalls the General Mills tweet after Prince died in April. The cereal company tweet read “Rest in Peace” against a purple backdrop. In place of the dot over the “i” was a single Cheerio. Naturally, fans lambasted the action as a crass promotion.

Brands have gotten into hot water for other types of social media mistakes, such as not understanding the conversation surrounding a hashtag and referring to natural disasters in promotions. DiGiorno Pizza’s tweeted “#WhyIStayed. You had pizza.” Evidently unknown to DiGiorno tweeters, the hashtag refers to domestic abuse. Gap urged people to shop on its website during Hurricane Sandy, a life-threatening storm.

How to Avoid Social Media Disasters

Marketers can heed these tips to avoid being included in case studies of social media mistakes.

Bottom Line: Cinnabon’s tweet on Carrie Fisher’s demise displayed the most recent example of a brand’s social media faux pas. Brands can easily arouse anger through tweets and social media comments that seemed innocent at the time. Following these tips can help marketers avoid  a scalding on social media.