KFC encountered a potentially disastrous dilemma when a chicken shortage forced the restaurant chain to close more than 600 stores across the UK. Logistical problems caused by a change in suppliers caused the disruption. The closures ruffled feathers to say the least. Closed restaurants angered customers, especially those who traveled out of their way. Some desperate customers resorted to calling the police. Many restaurants started to reopen although with limited menus and hours.

KFC, once known as Kentucky Fried Chicken, responded with full-page newspaper advertisements that showed a chicken bucket with its KFC label changed to “FCK.” Those who wonder what that stands for can consider adding a vowel. A brief apology followed the straightforward headline “We’re Sorry.”

It read: “A chicken restaurant without any chicken. It’s not ideal. Huge apologies to our customers, especially those who traveled out of their way to find we were closed. An endless thanks to our KFC team members and our franchise partners for working tirelessly to improve the situation. It’s been a hell of a week, but we’re making progress, and every day more and more fresh chicken is being delivered to our restaurants. Thank you for bearing with us.” 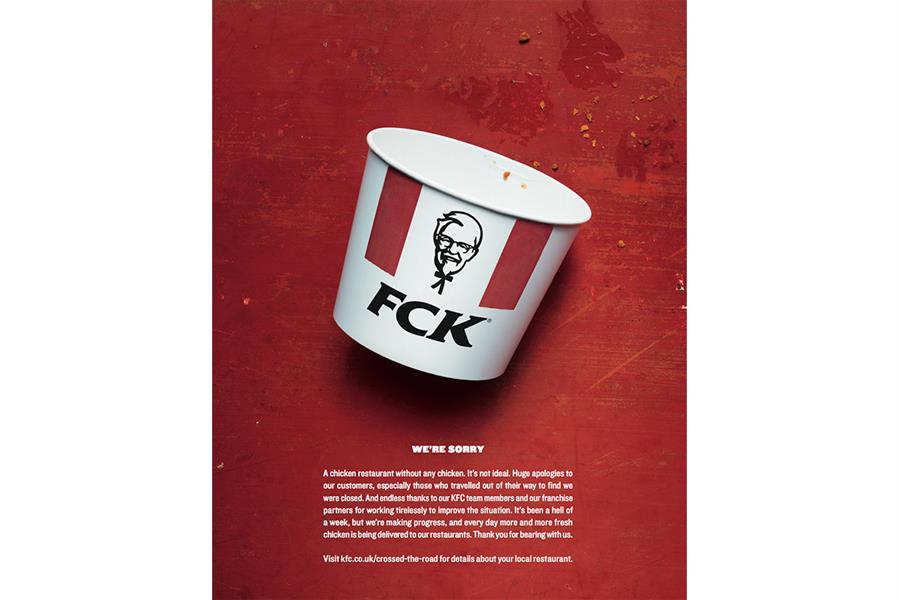 The response won praise from both customers and PR and marketing professionals in the UK and US. KFC probably won more customers and increased brand awareness through the incident.

Address the problem head on. KFC showed humility and stated in an understated way that it understood the problem. Yes, a chicken restaurant without chicken is not ideal.

Be humorous but only if appropriate. The KFC communications team applied humor without being offensive. Not having chicken is troublesome but it’s not life threatening. Avoid attempts at humor if they might cause offense.

Avoid blame. Other companies might have blamed the supplier. Instead, KFC’s ad lacked finger pointing. It started with “We’re sorry.”

Show gratitude. KFC thanked its team members and franchise partners. The company knew that the KFC restaurants were not responsible for this disaster. There is nothing they can do if the chicken does not arrive at their restaurants,” writes digital marketer Robbie Abed in Inc.

Maintain brand identity. The slight yet meaningful change to the brand’s logo gained attention, even though consumers still immediately associate it with the brand’s image, says marketing professor and Marketing Week columnist Mark Witson. Too many ads and marketing collateral fail to gain consumer’s attention or maintain brand identity due to constantly changing creative, overly clever executions and agencies that try to stamp their signatures on their work.

Integrate Traditional and Social Media. KFC’s strategy illustrates the power of integrating traditional and social media. Most people saw the ad on Twitter or Facebook, but the campaign could not have achieved strong organic reach without old-fashioned newspaper ads, Witson says. Considering only digital media or only print media is a massive mistake. Instead, employ a combination of the most appropriate strategies available.

Was the Chicken Shortage a PR Stunt?

The ad was so effective that Steve Richardson, executive creative director of creative agency Mr B & Friends, wonders if the chicken shortage might have been a calculated PR stunt. It wouldn’t be the first time manipulative marketers made up a story to promote sales.

“Currently KFC is benefitting from a PR boom. The whole situation has certainly got people talking and they’ve built on the confident brand personality,” Richardson told the Bristol Post. “KFC came across as human and humorous, and the event has probably increased brand awareness and won some new fans along the way.”

If the incident wasn’t staged, then its communications response probably saved the company, he says. The chicken episode, he says, offers another lesson: Hire a reliable supplier. Then you won’t need to write apologies.

Bottom Line: KFC’s PR crisis response to a chicken shortage that shut down hundreds of restaurants won accolades from consumers and PR and marketing professionals. Its full-page newspaper ads illustrate how an apology and the appropriate use of humor can save a company’s reputation and increase brand awareness and sales.