How to Invigorate PR Content with Anecdotes – 13 Practical Recommendations - glean.info

How to Invigorate PR Content with Anecdotes – 13 Practical Recommendations 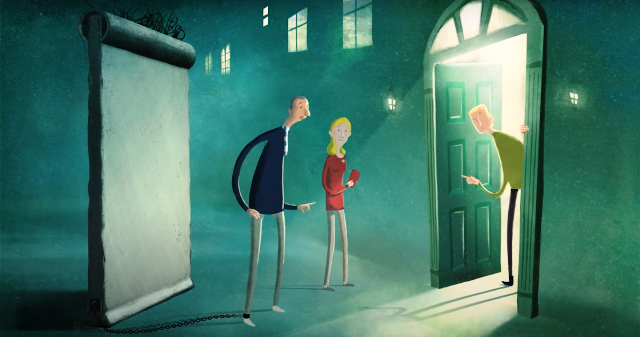 “Berlin 1987. My father was a guard on the west side of the Berlin Wall, while another man guarded the east,” a daughter narrates in an animated YouTube video.

Even though the wall came down and the family moved away, the father remained psychologically chained to the wall. It formed a barrier between him and the rest of the world.

His daughter decided to take him back to Berlin and show him the vibrant city it had become. They stayed at an Airbnb, and a man the father met at the apartment changed his life. That man was the soldier who had patrolled the opposite side of the wall. For the father, that serendipitous meeting broke the chains of the past.

“After that, things were better for my father,” the daughter concludes. “Airbnb. Belong anywhere.”

The true story skillfully relates how Airbnb unites people all over the world. It also illustrates the power of anecdotes for marketing and communications.

Many high-level executives, especially those with technical or engineering backgrounds, tend to hold a dim view of anecdotes, even though data indicate anecdotes can be powerful in gaining media mentions and spreading the brand’s message.

After reviewing three months’ worth of tech stories in The Economist, the Hoffman Agency found that 17% of its articles were anecdotal, says agency CEO Lou Hoffman. Anecdotal content in the business media consistently ranges from 15% to 25%.

“By using anecdotes in your writing, you can pack the power of narrative into any topic. Short or long, funny or inspiring: anecdotes are an essential tool for copywriters, and you can use them to seize your readers’ attentions,” says Rich Jinks at Articulate.

These recommendations can help writers in PR and marketing find and create attention-grabbing anecdotes.

Determine the purpose. Defining the purpose will help develop the story. Determine if you intend to report, amuse, inspire, provoke thinking or build a common ground with the audience. Stick to one point that illustrates why the anecdote is significant and supports the main idea of your promotional piece or article.

Structure the story. Anecdotes are short stories, usually about one or two paragraphs long. They’re structured like longer stories with a person or group, action and an ending — in other words, a beginning, middle and end. The storyteller typically first introduces the character who often faces a conflict or challenge.

Have a clear ending. The storyteller may state the conclusion or ask a question to let readers reach their own conclusion.  “Without satisfactorily wrapping up the loose ends of a story, or letting it meander to a stop in the middle of nowhere, you risk leaving your audience feeling cheated out of their time and attention,” writes blogger Nathan B. Weller.

Seek details. Details add color and credibility to stories. For instance, an article in The Wall Street Journal on the departure of design chief Jony Ive from Apple recounts a meeting between Ive and the design team. The details, such as the meeting’s location and time, and quotes from attendees bring an authority to the account that counters Apple’s public stance that Ive departed amicably.

Ask questions. To uncover details, ask questions and request examples. A public affairs rep working for the Navy struggled to pitch a story about a Navy squadron that had rescued a family of five lost in the Pacific Ocean for seven days, Hoffman recalls.

When he posted the story on Facebook, someone asked what kind of signal mirror the family had used to alert the Navy crew. After investigating, the PR rep learned that the signal mirror was the bottom of a soda can. Thanks to the anecdote, a local television station ran the story with the headline: “Local Navy Pilots Save Family Stranded at Sea with Help of a Cola Can.” USA Today eventually published the story, again featuring the anecdote.

Avoid unimportant details. Irrelevant details bog down the story. “Weed out trivial details that detract or ad only length,” advises communications consultant Dianna Booher. Ask yourself if each word, phrase and sentence is necessary.

Focus on the introduction. Set up the anecdote in an intriguing way, Booher says. Don’t say: “Let me tell you about a manager in our Miami office.” Instead say: “Managers sometimes exhibit their greatest leadership skills when they make a mistake. This was the case in our Miami office last quarter when . . .”

Don’t lie. “There is no art in it, no skill in it and as a good PR you don’t need to do it. And you WILL be found out,” writes Alan Edwards, founder of PR company The Outside Organisation. But it’s fine to embellish a fun story, he adds.

Be self-deprecating. “You need to be able to laugh at yourself. No one wants to continually hear how brilliant and clever you are,” Edwards says.

Visualize the story. Include visual elements that enrich the story. Use picture captions to deliver the core story message.

Use dialogue. “Let your characters talk,” advises freelance writer Kathy Widenhouse in Nonprofit Copywriter. “They’ll communicate their thoughts and feelings to underscore tension or conflict.” Eliminate any dialogue that doesn’t propel the story forward. Then, read the dialogue aloud to make sure it sounds realistic.

Appeal to the senses. Aim to describe your scene through at least one of the senses, in a way that underscores your point. “Let readers smell the pumpkin bread in the oven or the freshly-turned dirt at the building site,” Widenhouse says. “Let their skin prickle … sweat pour down their backs … ice cubes melt in their mouths.”

Bottom Line: Anecdotes can transform dull copy into captivating articles or presentations and transfix audiences. Because journalists often include the brief stories in their articles, anecdotes offer a powerful tool for obtaining publicity.