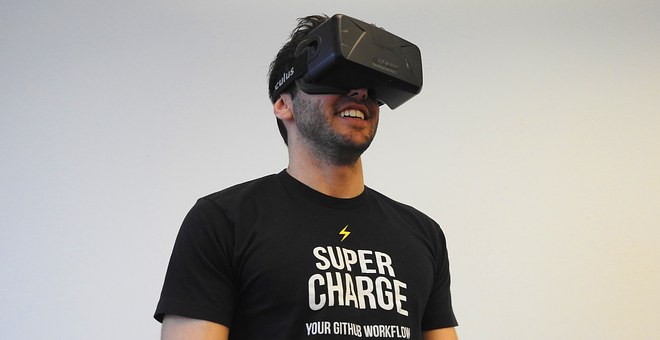 Virtual reality has been touted as the “Next Big Thing” and the marketing technology of the future. It may remain the technology of the future for quite some time. Virtual Reality isn’t ready for marketing yet, asserts Forrester Research in a new report. “Critical-mass consumer adoption of high-end VR headsets is five years away,” states the report, according to MarTech Today. But 360-degree video “will flourish on low-to-mid-end VR devices in the meantime.”

At this point, VR remains reserved for organizations intent on establishing themselves as technologic pioneers. According to many observers, however, VR likely will live up to its hype in the not too distant future.

I agree with the optimists. The adoption of radical new technology is often surprisingly slow. Eventually, it becomes part of society’s fabric. VR will too. VR creates a fully immersive experience through 360-degree, three-dimensional videos with headsets or 360 degree online videos. Many marketers have been excited about providing high-impact, memorable marketing experiences for customers.

The Forrester report focuses on the shortcomings, hurdles, hype and misperceptions about VR – and doesn’t recognize the market incursions already made by VR. “Virtual reality (VR) generates a lot of hype and confusion,” states the report, available for a fee for non-clients. Part of the confusion may be due to definitions.

Forrester distinguishes the encompassing videos viewed through headsets and 360 degree videos, which says falls short of true virtual reality. Then there’s augmented reality, such as Pokémon Go, that combines the real and artificial worlds.

VR headgear manufactures have shown more enthusiasm for the devices than consumers, points out The Next Web.

Sony sold more than 745,000 VR headset units last year. Oculus about 243,000, and HTC sold another 420,000 units, it says, citing SuperData Research. The headsets typically cost around $600. While hardcore gamers willing spend such amounts, most gamers are content with a console.

“Virtual reality might still be the future, but it doesn’t appear it’ll be coming as soon as any of us thought,” TNW concludes.

Comment: The problem of consumers not understanding what the technology can do for them is similar to the marketing and consumer education issues faced by Sony when it first introduced the ½” Betamax videotape recorder, that TiVo had with the digital device to time shift viewing of TV shows, and that interactive video producers (my previous life) encountered.

Adoption was slow initially, but now there are digital video recorders in most every person’s hand and a digital recorder beneath most all TV sets, while the internet is today’s omnipresent reincarnation of interactive video. In other words, lack of immediate consumer acceptance is definitely a surmountable problem – provided that the technology truly does deliver consumer benefits.

Comment: Production costs of most any type of electronic gear fall more rapidly than most any other product. Inevitably, VR headgear will be used initially in specialized environments, but the equipment will be easily affordable for use in the home.

Comment: Professional video production has always been expensive and most likely always will be. Today’s movies in 3D demonstrate that the public is willing to pay extra for a special experience. Although first developed in 1915, 3D films didn’t achieve popularity until the 1950s. The many 3D films then required two synchronized projectors. It wasn’t until IMAX came along in the 1980s that 3D achieved both critical and popular success. The VR market ramp, though not likely to be nearly as long, will take a while. The technology will improve along the way and costs of video production will shift lower.

To succeed, virtual reality needs strong advocates who have technological vision, good intuition about consumer adoption of new technology, and the perseverance to stick it out through initially slow market acceptance. That’s what happened with technology champions like Akio Morita at Sony, Jim Barton and Mike Ramsay at TiVo and the inventors of the IMAX movie camera and projector. (Interestingly, only one of them, IMAX, became the dominant player in the markets they invented and fostered.)

Those advocates and early adopters can include brand marketers who strive to demonstrate a technology’s potential and to achieve a distinctive user experience that advances a product relationship with the customer. That’s exactly what is happening today with machine intelligence as championed by IBM and its Watson project. It can and will happen with virtual reality too. The long-term champions have yet to step forward, though Microsoft is trying.

We are not the only commentators with faith in the technology.

Both VR and AR may become the next big computing platform, predicts Goldman Sachs Research. “We see qualities in VR/AR technology that can take this from niche-use case to a device as ubiquitous as the smartphone,” Goldman Sachs researchers state.

Bottom Line: Obstacles have slowed marketers’ expected adoption of virtual reality videos. Still, VR adherents predict the immersive video experience will be “the Next Big Thing.” The question is when.